Social networking in the digital realm has evolved rapidly over the last 15 years. What began on our computer screens quickly found its way onto our smartphones, allowing us to connect with our family, friends, and colleagues anywhere, at any time.

The next iteration of this networking is now in development. It’s called the metaverse, and it’s a virtual world (or worlds) accessible through more immersive devices that will take users to the next level within digital social networks and allow much more interaction than is currently possible.

It’s estimated that this exciting technology could be worth up to $1.6 trillion annually by the end of the current decade. It’s a sizable opportunity for the innovative companies developing the metaverse, with lots of entrants vying for a competitive edge. Wall Street is betting these two stocks could be at the forefront of this new competition. 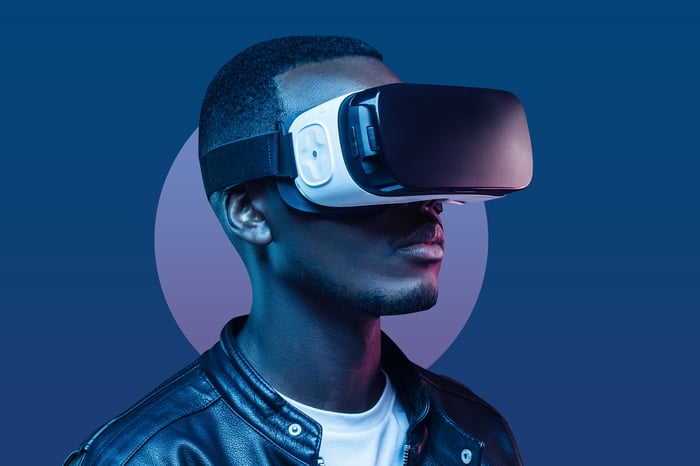 Previously known as Facebook, Meta Platforms ( FB 2.16% ) is by far the leader in the social media industry. With over 2.9 billion monthly active users, it’s arguably the best-positioned company to build the next generation of the digital social experience. And while that happens, investors get the benefit of owning highly profitable assets like Instagram, WhatsApp, and Facebook.

But it hasn’t been smooth sailing lately. Meta Platforms stock price has suffered a steep 41.2% decline since the company reported full-year 2021 earnings on Feb. 2. Meta is struggling to navigate user privacy changes by iPhone maker Apple ( AAPL -1.06% ), which have affected Meta’s ability to target advertising toward specific users. Meta estimates the changes could result in $10 billion in lost revenue in 2022, which has made investors nervous.

Meta’s Reality Labs segment, which is tasked with developing the metaverse, also raised eyebrows in the investment community after reporting a loss of $10 billion in 2021. But given the size of the opportunity ahead, that could prove to be a drop in the bucket over time. Meta is trying to build the foundations of this technology, which could give it control (and pricing power) over the transactions that occur within it. Owning the ecosystem in that fashion could be an enormous financial windfall, especially if the metaverse supports its own digital economy.

That raises an important point: Analysts expect Meta to generate $132 billion in revenue during 2022, which would represent a compound annual growth rate of 38% over the last decade. Put simply, the company is a financial powerhouse, and its investments in Reality Labs so far certainly won’t break the bank.

In light of the stock’s steep decline, Meta Platforms now trades at a price-to-earnings multiple of just 14, based on 2021 earnings per share of $13.77. That multiple is 55% cheaper than the multiple for the tech-centric Nasdaq 100 index, meaning Meta stock would have to more than double just to trade in line with the broader tech sector. Snap ( SNAP -1.68% ) is another major player in the social media space that’s turning its attention to the metaverse, albeit with a unique twist. Snap is the parent company of the Snapchat platform, which is heavily focused on camera technology to enhance its users’ experience.

Unlike Meta Platforms, which is building virtual reality (VR) technologies as a base for the metaverse, Snap is developing augmented reality (AR) technologies. Where VR immerses the user entirely in the digital realm, AR weaves digital technology into the physical world to amplify everyday activities.

A VR headset restricts the user to a single physical space, whereas Snap’s Spectacles glasses are designed to be worn everywhere, projecting digital experiences into the user’s vision. Snap believes this will foster human connection, rather than further isolating users, which has been a core complaint about social media platforms as they’ve soared in popularity. But it’s also great for the business case, because wearable technology that can be used anywhere is far more practical, and could help drive adoption.

In the here-and-now, Snap had one of its best years ever in 2021. It finally showed signs of beating its key rival in the social media space, Meta Platforms, as it appears to have successfully found a solution for the privacy changes at Apple that Meta is struggling with.

Snap generated a record $4.1 billion in revenue for the year, marking a tenfold increase since 2016, leading analysts to predict that 2022 could be the first year it delivers a profit.

Credit Suisse is one of the most bullish banks on Wall Street when it comes to Snap stock, betting its stock price could soar by 210% to $93 per share. And over the long run, if Snap’s approach to the next generation of social networking proves best, that might be a conservative target.