Stellar Lumens ( XLM -4.32% ) climbed about 100% last year. But since, like many cryptocurrencies, this player has struggled to move higher. Year to date, stellar is down about 24% and trading at about 20 cents. Still, Stellar remains a decent-sized player compared to the thousands of cryptocurrencies out there. It is No. 31 when it comes to market value.

Of course, Stellar may climb from today’s level. But the big question is does it have what it takes to make it to and past the key level of $1? Let’s take a closer look at this crypto player for some clues. 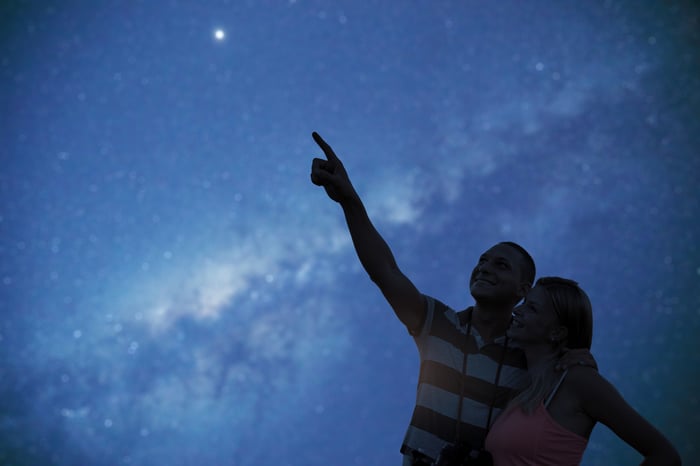 Transferring money around the globe

Stellar is a decentralized network used for the transfer of money around the globe. The native currency is called the lumen, and it exists as a way to secure the blockchain’s operations. Each account using Stellar must hold a small number of lumens. In addition to security, Stellar uses lumens so that the system won’t favor one particular currency — such as the dollar or the euro. Instead, transactions are paid in lumens.

And this brings us to two major points: Transaction costs and speed. Stellar wins in both areas. Transactions cost only 0.00001 lumen. And each operation reaches completion within three to five seconds. Cost and speed have been trouble spots for some cryptocurrencies, including market giants Bitcoin and Ethereum.

So, what kind of applications can we find on the Stellar network? Developers can build global payment apps, asset exchanges, and micropayment services, for example. One major user of stellar is IBM. The company has built its IBM World Wire global payment network on Stellar.

What’s next for this dynamic network? According to the blockchain’s 2022 roadmap, Stellar aims to increase scalability and innovation. Stellar also wants to boost participation in the network and bring in new users. And the third point is the idea of ​​championing diversity and inclusion. Progress on any of these goals could offer Stellar’s value a boost.

Now let’s get back to our question. Could stellar climb to $1? Let’s look at this from a coin supply perspective first. Stellar’s circulating supply totals about 24.9 billion. So, if that supply reaches $1, we’re looking at a market value of $24.9 billion. That means Stellar would become the world’s ninth-biggest cryptocurrency. That’s very possible.

It’s also possible Stellar could reach $1 as use of its network increases. A look at Stellar’s recent statistics shows growth is happening. In the third quarter of last year, total accounts increased by more than 23% year over year to almost six million. The total number of payments soared 149% to nearly 30 million payments in the quarter. And through the end of the third quarter, Stellar had processed one billion transactions since the start of 2021.

It’s important to remember that all cryptocurrencies are risky. Competition is high and the market is relatively new. But Stellar has what it takes to reach for the stars — and that may mean $1 or more down the road.