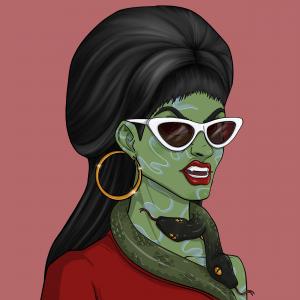 Amy Snakehouse wears a dress with a built-in double headed snake, a retro beehive and shades. I would love to take her dancing and see a glimmer of her fangs when she smiles.

A powerful being who appears to be the creator of all that is, mother earth, and all things other wordly and ethereal. Her pendant is metatron’s cube which is believed to carry all the shapes of the universe and be a symbol of a great angel.

Myra the Mermaid. Myra wears a golden crown of tarot cards that everyone would want in their spread. Her iridescent shirt doubles as scales when she takes to the water and her face has scales to match. Her powers include being able to shoot streams of ice

When they [NFTs] started to explode, I was very excited because I knew that Web3 could be a new way for artists, including visual, comedians and performance artists, to get their work out there”

NEW YORK, NEW YORK, UNITED STATES, March 21, 2022 /EINPresswire.com/ — Mystical Muses carbon negative NFT collection launching on March 25th, 2022 on the Ethereum blockchain was inspired by founder Jessica Brodkin’s spiritual awakening and desire to leave the mundane , stifling ‘Corporate America’ world. A former CIA analyst and now Reiki healer, Jessica was inspired by an insatiable curiosity to learn about the crypto world which led to the creation of the Mystical Muses NFT collection. This unique collection of gothic and legendary muses are 7,777 unique computer generated all-female tokens composed of 150 elements. The presale will take place on March 25th at the price of 0.06 ETH per NFT. Mystical Muses is minting the collection publicly on April 1st at the price of 0.07 ETH per NFT. If you are interested in the presale, please contact info@mysticalmuses.io for more information about the whitelist. For every NFT sold, 0.2 tons of carbon will be removed from the atmosphere making their collection carbon negative. Each mystical woman is a token into an exclusive membership with real utility that comes with weekly live events including comedy shows, reiki healing sound baths, tarot readings, and more.

Mystical Muses collection brings defining characteristics of the divine feminine **mythical, whimsical, goddess like, even fabricated, or enhanced, maybe fictional*, into one universally identifiable NFT collection, where each holder can create or purchase a muse that speaks to their personality or embodiments of aspirational avatar personality. Inspired by Jessica’s transformation, and healing experience, the Mystical Muses collection has brought an intuitive and whimsical ethereal element to the NFT world.

As a promise to its commitment to the environment, Mystical Muses is partnering with Nori, a blockchain-backed carbon dioxide removal marketplace based out of Seattle, Washington. Nori’s mission is to reverse climate change by making it as simple as possible to pay people to remove carbon dioxide from the atmosphere, and they’ve already gotten paid farmers over one million dollars for regenerative practices that sequester and store carbon in the soil. For every Mystical Muse NFT sold, 0.2 tons of carbon will be removed from the atmosphere via Nori.

The online events will include the following:

Founder Jessica Brodkin is no stranger to higher level thinking and analytical skills both in the corporate and metaphysical world. She is an MIT and Johns Hopkins graduate who worked at the CIA for eleven years before becoming a stand up comedian and reiki healer in NYC. She is also no stranger to the media, as her story has been featured in the NYPost, CNBC, SiriusXM, AMC, and TruTV, and she has been regarded as a trendsetter and thought leader (with a touch of charm and humor) wherever she goes.

Jessica was initially very intrigued by the artistry of the digital space and was heard saying, “When they [NFTs] started to explode, I was very excited because I knew that Web3 could be a new way for artists, including visual, comedians and performance artists, to get their work out there.” Now, with the creation of the Mystical Muses collection, Jessica and her team, including co-founder Ryan Dacalos Filipino fashion and digital artist find themselves collaborating with a powerhouse, diverse, and divinely guided team ready to create social impact through not only the images that are bringing to market (and the unique spiritual modalities used for utilities) but also the ethical commitment Jessica and Ryan are creating with NORI by pledging to decrease the world’s carbon footprint with each NFT that is purchased.

Jessica and Ryan plan to make Mystical Muses an NFT company with longevity with plans that include a comedy club in the metaverse, wearable NFTs, and additional NFT collections.

The five categories of muses in the initial March 25th drop of the collection include: (1) ‘Golden Goddess,’ (2) ‘Farrah Collection’ which incorporation butterflies symbolize the crowns of living fairies, inspired by co-creator Ryan Dacalos’ Filipino heritage , (3) the ‘Amy Snakehouse’ recognizable with her double headed snake, a retro beehive and shades. (4) ‘Myra the Mermaid’ the Piscean inspired goddess of the ocean. Myra wears a golden crown of tarot cards that everyone would want in their spread. Her iridescent shirt doubles as scales when she takes to the water and her face has scales to match. Her powers include being able to shoot streams of ice from her mouth, and finally (5) ‘Olga of Odessa’ – represents the modern women warriors of Ukraine. She wears the helmet of the Scythian people who were a nomadic Iranian tribe with a tradition of female warriors on horseback who once fought in modern Ukraine and the Caucasus mountain region. Brodkin is of Iranian origin from the Caucasus mountains and Eastern Europe (partially Ukrainian).


EIN Presswire’s priority is source transparency. We do not allow opaque clients, and our editors try to be careful about weeding out false and misleading content. As a user, if you see something we have missed, please do bring it to our attention. Your help is welcome. EIN Presswire, Everyone’s Internet News Presswire™, tries to define some of the boundaries that are reasonable in today’s world. Please see our Editorial Guidelines for more information.