ADILABAD: Even though Telangana loves its movies, the residents of Asifabad, the district headquarters of Kumurambheem Asifabad, have been without a cinema theater for all this while. It would be pretty common to find hordes of cine lovers traveling to Mancherial or Adilabad to catch the latest flick on Fridays. However, the scene was sharply different this week as the first theater, Radheshyam, was launched at Asifabad on Tuesday.

In a joint collaboration, the District Rural Development Agency (DRDA) and Society for Elimination of Rural Poverty (SERP) with the help of women-run self-help groups (SHGs) came together to establish the first cinema theater in the district.

Though private theater management companies establish a unit at Rs 20 crore, a digital mini-theatre company, Picture Time, has been able to set up a theater with seating for 120 people at only Rs 50 lakh. For this, the SHGs have invested Rs 30 lakh, while Picture Time has invested the remaining amount. 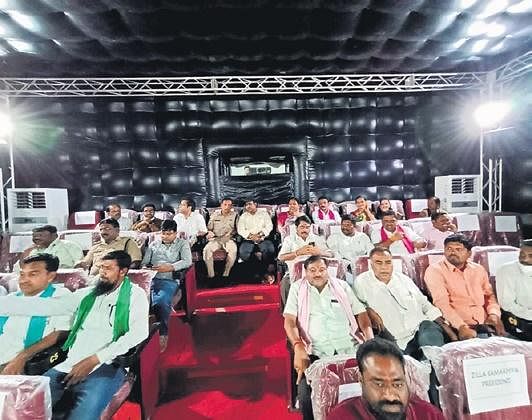 Picture Time staffers will maintain the equipment and impart training to the SHG members for a few months. After that, the SHGs will take over the entire operations. With a blockbuster already opening and constant patronage from residents, the theater management has planned to increase the shows to five from Sunday.

Speaking to Express, DRDA Assistant Project Officer B Srinivas says one acre of land was allotted for theatre. He adds that such mobile theaters operate in remote areas such as Ladakh and Arunachal Pradesh.
This idea came through after Panchayat Raj and Rural Development Secretary Sandeep Kumar Sultan directed officials to find ways to generate a monthly income of Rs 15,000 for 8,500 SHGs in the district.